Radon is a radioactive gas formed by the breakdown of uranium in the ground and in water. Radon gas is released upwards from these sources. It can also be released from some of the materials used in home construction which may contain very small amounts of uranium.

Your senses cannot detect Radon gas. It is colorless, odorless and has no discernible taste. Outside, it mixes with air and is diluted into concentrations too low to be worried about. The problem comes when radon gas enters an occupied enclosed space, such as a home. Here, it can accumulate in high enough concentrations to become a health risk.

Radon concentrations in enclosed spaces will fluctuate, but they are usually higher in colder months as attention to keeping doors and windows closed reduce the intake of outdoor air which dilutes the radon gas. Radon concentrations are also higher in recent years because newer energy efficient homes are designed to reduce the exchange of outside air. People who have upgraded insulation and seals in older homes also increase the risk of elevated radon gas concentrations.

Radon gas itself is not actually the primary cause of the heath issues such as lung cancer, which are associated with it. Radon gas breaks down into a series of decay particles known collectively as radon daughter particulate or RDP. Two of these are polonium 214 and 218 both of which can be ingested into the lungs where they break down further into alpha particles. The alpha particles release small bursts of energy which are absorbed by nearby lung tissue, resulting in lung cell damage. Damaged lung cells have the potential to result in a malignancy when they reproduce.

Radon is the 2nd leading cause of lung cancer, after smoking. You should also be aware that the risk from radon exposure for those who smoke or are exposed to second hand smoke is much greater than for a non-smoker. Because RDP are charged in the decay process, this means they will also adhere to airborne dust particles or cigarette smoke, which are then inhaled into into occupants lungs where there is increased risk they will remain and cause cell damage. Smokers & dusty homes have increased risk of cancer from Radon gas.

It is estimated that 21,000 deaths in the US and 1900 death in Canada annually can be directly attributed to RDP (See chart below). These is also growing evidence that up to 1/3rd of lung cancer deaths attributed to cigarette smoking may in fact be attributable to RDP.

SO WHAT CAN I DO?

First, determine if you have a problem. To do this, you need to have your dwelling tested. If radon gas concentrations are above recommended guidelines, then steps should be taken to rectify this.

Tests can be performed with short term detectors which test in a period of a few days or long term testers, which can test for up to a year. A short term test should be done first to determine if a problem currently exists, so a solution can be implemented as soon as possible. Later you may want to look at episodic short terms test or long term tests to ensure your reparation solution is working or to be sure you are not subject to problems due to seasonal variations.

You can purchase do it yourself kits for testing or you can hire a qualified professional to do the measurements. We STRONGLY urge everyone to seek a QUALIFIED organization with CERTIFIED TESTERS to do the testing. We also encourage everyone to continue testing on an on-going basis to ensure that any implemented solution is functioning effectively. Even houses that were tested and have no issue can later develop leaks (eg. A foundation crack) or changing outside influences can alter the concentrations of radon gas in the surrounding ground.

WHAT CONSTITUTES A PROBLEM?

RDP levels are measure in units known as a Becquerel. Becquerel is a unit of measure of the number of radioactive decays of radon atoms. One Becquerel means one disintegration event per second. Higher Becquerel numbers mean higher concentrations of radon gas.

WHAT ARE MY CHOICES

The most common and effective radon reduction method is Active Soil Depressurization (ASD) ASD is accomplished by drilling a hole in your foundation and then installing a pipe system with a fan to draw radon gas from under your dwelling and exhaust it outside. This method is effective because it prevents the source of the problem (Radon gas)from entering the dwelling.

In some cases, it is cost prohibitive or impractical to use ASD. A proven alternative, in these cases, is the use of ECOairflow electronic air filter technology to filter out RDP. ECOairflow technology was tested by an internationally recognized independent US lab. In every test, it was proven to reduce RDP to levels below WHO recommended levels when installed, setup, and run as directed.

While it is possible to do your own testing and to install either an ASD system or filter by yourself, we cannot over emphasize the benefits of having the work done by a professional trained in radon mitigation and certified by an accredited organization. Mistakes made by untrained individuals can be fatal.

In the US, you can find information through AARST www.aarst-nrpp.com In Canada, CARSTwww.carst.ca plays a similar role. If you are at a stage where you want to utilize the services of a certified dealer, we can recommend National Radon Defense, www.nationalradondefense.com who have a network of certified dealers throughout the US and Canada. 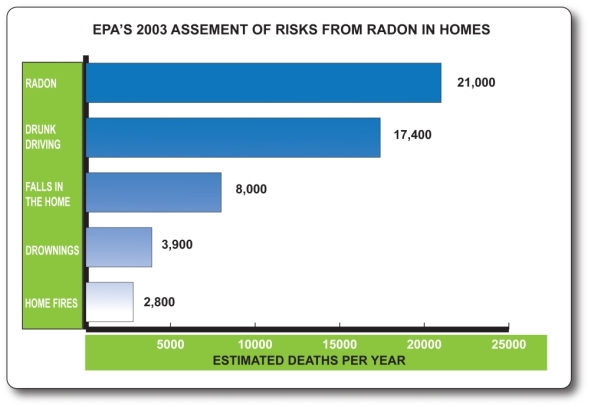